I just finished Taipei by Tao Lin and really liked it. It gets a lot of shit for having "no real plot", which is true, the book is a meandering narrative of Tao Lin's drug-addled life, but the plot is the least relevant aspect of the book. I enjoy Lin's self-conscious observations and the way in which he captures thoughts that seem vaguely familiar to me, as if I've subconsciously noticed but never elucidated them.

In my quest to find similar work-- contemporary, relatable, books, that follow a similar stream of consciousness style-- I stumbled upon the alt-lit (Alternative Literature) movement, a burgeoning style of writing that claims to embody this brand of self-conscious tumblr speak. Believing I had found exactly what I was looking for, I hit up goodreads, obscure literary promoters, and blogs like Alt Lit Gossip, scrounged up a variety of work.

I've never been more disappointed in my life. Within an hour, all 100mb of PDFs were trashed. I then felt embarrassed having even the ghosted PDFs linger around in my ~/.local/share/Trash/ folder. I imagined a Canonical employee silently harvesting my data and judging me for this awful material, so I emptied my trash folder and incinerated my hard drive.

Ok, no, I feel bad dismissing published work like that. Maybe it was just some avant-garde post-meta-ironic-wave social commentary and I lack the hipness to understand the larger picture. Maybe my lack of deep appreciation for conventional poetry confounds my opinions on this strange defiance of conventions.

To be more fair, in my non-english degree holding, not very well-read, opinion, it was absolutely terrible.

Here is a quote from Crunk Juice by Steve Roggenbuck, one of the most prominent alt-lit "aficionados".

in my garage i look at the wall. so many hammers

Here is another quote from Crunk Juice by Steve Roggenbuck:

Here is yet another quote from Crunk Juice by Steve Roggenbuck:

If you see any kind of vague beauty in these, please e-mail me your analysis immediately, because I am completely fucking dumbfounded that this person is famous enough to have a google information sidebar knowledge-panel-thing. Is this one big inside joke? Someone please tell me.

{% include figure image_path="/images/whysteve.png" caption="...creative misspelling and themes of carpe diem and appreciation of the natural world..." %}

i barfed in ur toolshed when i was stuffin a rhino corpse in ur
lawnmower’s grass bag :(

I imagine: Steve Roggenbuck in a dark room in front of a MacBook Air, eyes closed, trying to channel is inner Kerouac-- feeling the warmth of pure expression pump through his aorta. He convulses in ecstasy as the now boiling energy reaches his spastic fingertips, dancing across the keyboard and uninhibited consciousness, free of grammar conventions, free from the burden of being easily readable, projecting itself unto the screen in a beautiful moment of artistic creation. Exhausted, he reclines in his chair, hands laced behind his head, and admires his work...

EXPOSE YOURSELF AS YOU ARE
WITHOUT TRYING
TO BE SOMEONE ELSE

whatever people may think, it is all right
just be yourself
thank you
completely enjoy your new life

A single tear slides down his cheek.

I think I've heard almost that exact poem in a YMCA promo video.

The more I read, the more crazed I become with the question of why does anyone like this? People paid \$15 for a physical copy Crunk Juice. While a lot of alt-lit is pay what you want, people do spend money on it, people spend time on it, and people write articles covering it.

Look at this goodreads review.

Most of the review is just well-written contextualizing, but this paragraph stood out to me:

It’d be a mistake to disregard Roggenbuck’s style as gimmicky or dumbed-down bro-etry. His work is inherently his own: inclusive, positive, and spunky. At the same time, Roggenbuck isn’t the harbinger of the grammar apocalypse. “Crunk Juice” might have enough comma splices, em-dash abuse, and de-capitalized pronouns to kill a librarian, but Roggenbuck doesn’t think all poetry should look like his. He just thinks everyone should look like a poet.

Everyone seems to be defending Roggenbuck as not gimmicky, but then praises him for being a gimmick. He is only inclusive in the sense that his style is pedestrian and superficial, spunky in the 6th grade "lol so random" sense, and positivity isn't a quality of a lot of good poetry. And sure, "everyone should look like a poet" is a message most can get behind, but I feel the real message from Crunk Juice is anyone can sell their throwaway thoughts under the facade of poetry.

This message doesn't just pervade Crunk Juice. I scanned through the supposedly "best" alt lit only to find them all plagued with the same "all of my random thoughts are publishable because I am a special snowflake" theme. Take a look at SELECTED UNPUBLISHED BLOG POSTS OF A MEXICAN PANDA EXPRESS EMPLOYEE by Megan Boyle. 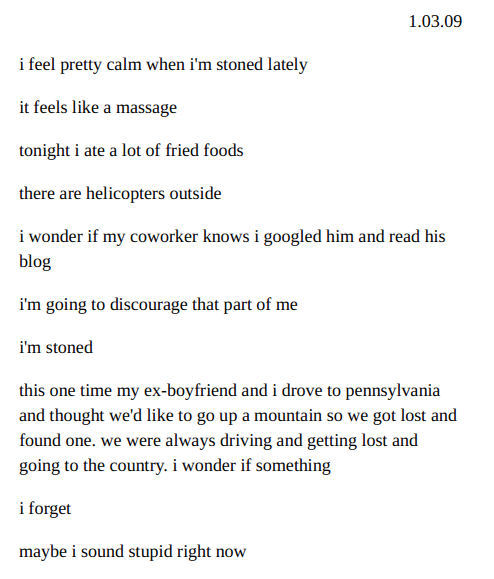 Most nights, I open up vim and quickly jot down what I was thinking about that day, which often includes what happened. I've always wondered what it would be like to host these entries publicly, to expose the entirety of myself to the internet. I can appreciate people who do that. What I've never wondered about, is publishing them. I'm not Richard Feynman, David Foster Wallace, or Nietzsche-- no one wants to pay for my unstructured day-to-day thoughts and happenings.

I'm not sure what prompted Megan Boyle to publish this, or why people buy it. The draw of most un-edited published journals is the ability to see the unfiltered thought patterns of an amazing mind. Megan Boyle isn't a famous philosopher, athlete, or scientist, she is recognized for the act of writing this journal. I wouldn't complain at all if her thoughts were, at the very least, interesting, but as depicted in the samples above and below, they most definitely aren't. 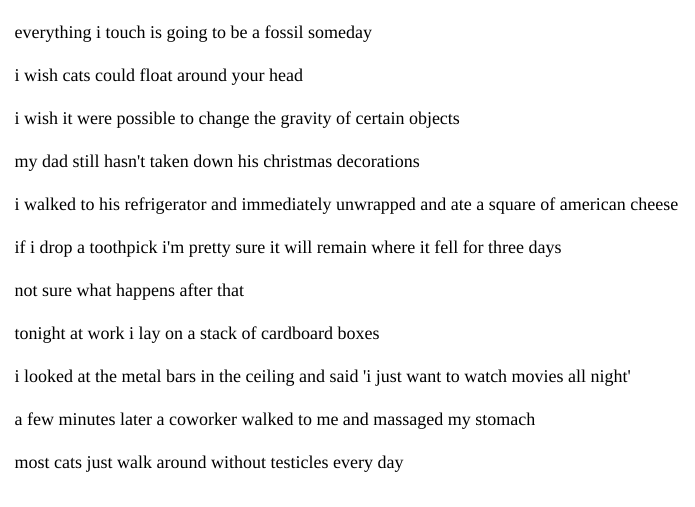 Let's not forget that these are "SELECTED" blog posts; Boyle carefully reviewed the above, pondered its merit, and concluded it was worth including in a published work.

I love exploring someone else’s thoughts. I just wrote a post on my passion for fucking personal websites. I'd very much enjoy a more interesting blog in Megan Boyle's style. But alt-lit just seems exploitative of this. Even voyeurs have standards. The whole no grammar gimmick can in no way hide the level of pretension evident in someone selling their effortless thought associations as art.

Alt lit seems to have good intentions: to promote the idea that 21st century drug abusing internet dwellers have something to say and too encourage them to write in a way that captures their unfiltered, self-conscious thoughts. Sadly, it has mostly just given uninteresting people enough false confidence in their unedited, low-effort, inner monologues to decide to formally publish it.