Why I Keep My WiFi Off

Three months ago, you bought tickets to the World's Greatest Festival 2021.

Millions of performers, celebrities, models, and artists flying in from all over the world. Thousands of stages. Everything from stand-up comedy to a Great British Bake Off live performance to full scale classical orchestras to TikTok stars hitting twenty second dances in quick succession. Professors debating foreign policy right next to a Cardi B grinding on Bluface blasting Thotiana. A sight to behold.

Unfortunately for you, you have a math final the day after the festival and you haven't started studying.

You can't NOT go to the World's Greatest Festival, so you decide to compromise.

The compromise: you will roll up to the festival in a sound-proofed bubble. Inside the bubble, you'll have nothing but a camelback full of unadulterated redbull, and a dense book on category theory. Every twenty five minutes, you'll give yourself a five minute break to exit the bubble and run around the fest for a bit. Foolproof plan.

You perch your bubble right in the center of it all. You stretch your neck a bit. Thirty degrees to the left, you see a throng of the hottest fitness models in the world competing in a crowd-sourced beauty competition.

Forget it. Focus. Category theory. You can look in twenty-five minutes.

Thirty degrees to the right, you see all your friends sitting in a circle laughing about something you can't hear through the bubble. What could they be laughing about? They pass around a photo of something, tears streaming down their cheeks.

Or maybe... maybe you could just poke a little hole in your bubble. You'll just listen to their voices in the background while you work. It won't be distracting. Maybe even occasionally drop a word in-- stop. Focus.

You haven't read a single word. The book feels heavy on your lap. It's got to be at least ten pounds.

Out of the corner of your eye, you catch your friend point at something behind you. The whole squad freaks out. They're laughing their asses off. More tears. You tense your neck.

You can't look. You strategically angled yourself so your back would be towards the area they're pointing at. It's where all the most degenerate, depraved, and therefore captivating, stages are. You'd have to twist like an owl to catch a glimpse. You can't claim it was an 'accident'.

But... WHAT COULD IT BE? You haven't seen them this animated in weeks. Ten years from now they're all going to be reminiscing about That Crazy Thing they saw at the World's Greatest Festival and sure they'll show you the archived stream but it's not the same as sharing the laughter in real time and--

Forget it. Category theory. You've read nothing so far but turn the page anyway. Just to 'get in the mood'.

God. Your mood is unchanged. You feel the energy of everyone around you. Having the time of their lives in the World's Greatest Festival. Free. Unbothered. Dancing. Laughing. Yelling about how they made a billion dollars in three weeks off DogeCoin. Why are you straining and squinting at comonadic adjunctors? Is this really necessary? Is this really what you want? Is this really how you'll find happiness? A high schooler plays fortnite on stage while a hundred thousand people shower him in five dollar bills.

You turn the page. 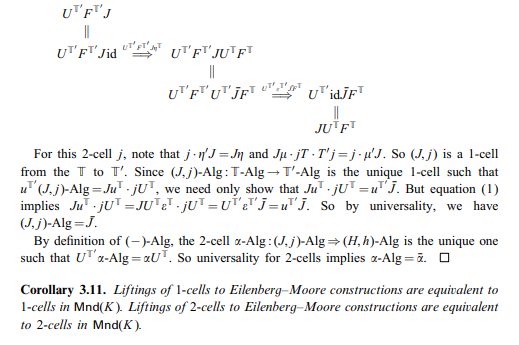 Your friends are still laughing but you don't dare to turn your had. Instead you look over to a group of morose looking kids, heads down with huge headphones, listening to depressing hip hop flips.

Your timer goes off. Twenty five minutes up. Break time, thank God. You leap out of your bubble, right into the arms of your friends. They rush you to the Bluface stage. Tears of joy stream down your face as the textbook vanishes in the distance.

You shout, "JUST FIVE MINUTES OK! I HAVE TO GET BACK TO STUDYING!"

No hears you over the music...